Planning for the Future and Changes to the Current Planning System

The Government has published two consultations on proposed changes to the planning system in England:

The Changes to the Current Planning System document sets out proposals for changes to the standard method for assessing housing numbers in strategic plans; delivering First Homes; and supporting SME developers.

We welcome the government’s agenda to be more ambitious for the places we create, expecting new development to be beautiful and to create a ‘net gain’ not just ‘no net harm’; to move the democracy forward in the planning process through harnessing digital technology; and, to improve the user experience of the planning system.

However, as always, the devil is in the detail.  We set out below some of the possible (unintended) consequences of the proposals from a viability and delivery perspective.

We would welcome any feedback and debate on the following draft representations.

The government’s proposal is that:

In order to make the transition it is necessary to define the criteria for policy compliance, under which a development is assumed to be viable.  The government proposes that, under the new system, a policy compliant planning application should seek to capture the same amount of value as would be captured under the Local Authority’s up-to-date published policy.

Option 1: Where a local authority has a policy on affordable housing tenure mix, that policy should be followed, but with First Homes delivering a minimum of 25% of the affordable housing products. First Homes should replace as a priority, other affordable home-ownership products, prioritising the replacement of those tenures which secure the smallest discount from market price.  Then:

Option 2: A local authority and developer can negotiate the tenure mix for the remaining 75% of units.

The consultation questions and our responses are set out below.

Q8: Which do you think is the most appropriate option for the remaining 75% of affordable housing secured through developer contributions? [Option 1, 2 or another].

Response - We concur with government that Option 1 is the preferred option as this would provide more early clarity for developers as to what constituted a policy compliant development, and would reduce negotiation, which can slow the development process.

Q9: Should the existing exemptions from the requirement for affordable home ownership products (e.g. for build to rent) also apply to this First Homes requirement?

Response – Yes. First Homes are just another affordable home ownership tenure type and therefore impact the relevant build for sale schemes.  First Homes and any home ownership-based tenure is incompatible with built to rent which is a completely different development typology with a different set of scheme economics.  This is already reflected in the PPG and there are rental based affordable housing tenure types which are applicable to build to rent schemes e.g. Affordable Private Rent.

In terms of the level of discount for First Homes, the proposal is that the minimum discount should be 30% from market price. Local authorities will have discretion to increase the discount to 40% or 50%. This would need to be evidenced in the local plan making process. Furthermore, where discounts of more than 30% are applied to First Homes, the requirement for a minimum of 25% of units onsite to be First Homes will remain in place.

Q13: Do you agree with the proposed approach to different levels of discount?

Response – No.  The uplift in land value from a development scheme is finite. Therefore, if you increase the discount, all things being equal, there should be less units.  The percentage of units and the percentage of discount should be set locally by local authorities having regard to their evidence base.

Government intends to introduce a First Homes exception sites policy, to replace the existing entry-level exception sites policy.  The proposal is to introduce some flexibility in the policy to allow a small proportion of other affordable homes to be delivered on these sites where there is significant identified local need as well as a small proportion of market homes where this would be necessary to ensure the viability of the site overall. Also, there is to be no site area threshold for exception sites which should be proportionate in size to the existing settlement.

Q14: Do you agree with the approach of allowing a small proportion of market housing on First Homes exception sites, in order to ensure site viability?

Response – No.  This just blurs the boundaries between normal site allocations and exceptions sites.  Introducing market housing could lead to the landowners’ value expectations being raised so the value flows to the landowner and not to the affordable housing cross-subsidy. It would be necessary to emphasise the existing use value (EUV) in these circumstances and no premium.

Q15: Do you agree with the removal of the site size threshold set out in the National Planning Policy Framework?

Response – Yes.  However, the question of what is proportionate may need to be more adequately defined.

As part of the Covid-19 recovery plan, Government is proposing to reduce the burden of S106 contributions on SMEs for more sites for a time-limited period.

Currently, national policy is that affordable housing contributions should not be sought for developments of fewer than 10 units (small sites).

Government is proposing to increase this threshold to 50 units. Government itself recognises that this could inflate land prices in the longer term, and are proposing that the higher threshold is implemented for a time-limited period of 18 months only.

Q17: Do you agree with the proposed approach to raise the small sites threshold for a time-limited period?

Response – No.  This is a sledgehammer to crack the wrong nut. The problem with small sites is not that they are less viable than large sites (all sites are appraised by the residual land value methodology).

Q20: Do you agree with linking the time-limited period to economic recovery and raising the threshold for an initial period of 18 months?

Q23: Are there any other ways in which the Government can support SME builders to deliver new homes during the economic recovery period?

Response - The solution is not to exempt all small sites below a particular threshold from S106.  The solution is to allow a more efficient mechanism for delivery.  We recommend that S106 affordable housing (and other contributions) on small sites is via commuted sum and/or (the new) infrastructure levy.  This creates certainty for the SME developer who can make his/her contributions off-site and deliver 100% market housing on small sites.

Part 2 - Planning for the Future

The Planning for the Future White Paper is based around five propositions:

This paper is focussed on the reform of developer contributions, as this has major consequence for viability and delivery.

Governments proposals are to:

Government states that it wants to bring forward reforms to make sure that developer contributions are: fair, transparent and consistent/simplified – which are consistent themes from previous reforms.  Interestingly, this time Government also says that they want contributions to be ‘buoyant’.  This is ‘so that when prices go up, the benefits are shared fairly between developers and the local community, and when prices go down there is no need to re-negotiate agreements’.  Does this mean that there is a mechanism in the Agreement to reduce contributions?

Q21. When new development happens in your area, what is your priority for what comes with it?

Response – a balance between affordable housing, employment opportunities, green space and infrastructure.  These are all equally important and it therefore makes sense to have one regime for land value capture.

Proposal 19 (of the White Paper) is that: The Community Infrastructure Levy should be reformed to be charged as a fixed proportion of the development value above a threshold, with a mandatory nationally-set rate or rates and the current system of planning obligations abolished.

Q22(a). Should the Government replace the Community Infrastructure Levy and Section 106 planning obligations with a new consolidated Infrastructure Levy, which is charged as a fixed proportion of development value above a set threshold?

Response – Yes. The dual approach of S106 contributions and CIL is overly complex.  The CIL Review in October 2016 set out the weaknesses including:

Response – Locally.  The Infrastructure Levy rate should be set locally.  A one-size-fits-all approach across the country will not lead to more land value capture – but less land value capture.  This is because:

Q22(c). Should the Infrastructure Levy aim to capture the same amount of value overall, or more value, to support greater investment in infrastructure, affordable housing and local communities?

Q22(d). Should we allow local authorities to borrow against the Infrastructure Levy, to support infrastructure delivery in their area?

Response – Yes.  If the Infrastructure Levy achieves it's stated aims and provides certainty, there is no reason why a local authority should not be allowed to borrow against it.

Proposal 20: The scope of the Infrastructure Levy could be extended to capture changes of use through permitted development rights.

Q23. Do you agree that the scope of the reformed Infrastructure Levy should capture changes of use through permitted development rights?

Response – Yes.  It is not equitable for permitted development schemes to be excluded from planning gain.  This leads to a differential regime and incentivises poor quality development.

Q24(a). Do you agree that we should aim to secure at least the same amount of affordable housing under the Infrastructure Levy, and as much on-site affordable provision, as at present?

Q24(b). Should affordable housing be secured as in-kind payment towards the Infrastructure Levy, or as a ‘right to purchase’ at discounted rates for local authorities?

Response – Yes. This is effectively what happens now with S106 affordable housing which is delivered onsite ‘in-kind’ rather than via a commuted sum.

It is important that the affordable housing is continued to be appraised in the Plan Viability assessment as being on-site.  However, the local authority has the option to receive Infrastructure Levy in lieu e.g. see small sites above.

Q24(c). If an in-kind delivery approach is taken, should we mitigate against local authority overpayment risk?

Response – No.  This an over-complication.  Currently the on-site S106 affordable housing is specified and delivered for and agreed transfer price to an RP or local authority. This is for value (no over or under payment).  This is what should happen in the future except it would be called ‘Infrastructure Levy- affordable housing’ rather than ‘S106-affordable housing’.

Q24(d). If an in-kind delivery approach is taken, are there additional steps that would need to be taken to support affordable housing quality?

Proposal 22: More freedom could be given to local authorities over how they spend the Infrastructure Levy.

The government is proposing to keep the Neighbourhood Share which is a sop to local communities, but can undermine the funding required for the ‘big-ticket’ infrastructure requirement (roads and schools etc.)

Rather alarmingly the government is proposing that they may increase local authority flexibility to allow them to spend Infrastructure Levy receipts on their policy priorities, once core infrastructure obligations have been met. The suggestion is that, in addition to the provision of local infrastructure, including parks, open spaces, street trees and delivery or enhancement of community facilities, this could include improving services or reducing council tax.  When has there ever been a surplus of funding for infrastructure and affordable housing?  The Infrastructure Levy should be ring fenced for these purposes, otherwise it is just another tax grab.

Q25. Should local authorities have fewer restrictions over how they spend the Infrastructure Levy?

Response No - The Infrastructure Levy should be ring fenced for affordable housing and infrastructure to mitigate the harm/externalities caused by the development.

Whilst the Government is rightfully seeking to ‘build back better’ after Covid-19, some of these proposed changes could lead to delays as plan-makers transition to the new regime and landowners wait for policy to crystallise.

For those actively involved in setting policy and negotiation of S106 agreements, careful consideration will need to be given to the implications on land value, profit and planning gain. 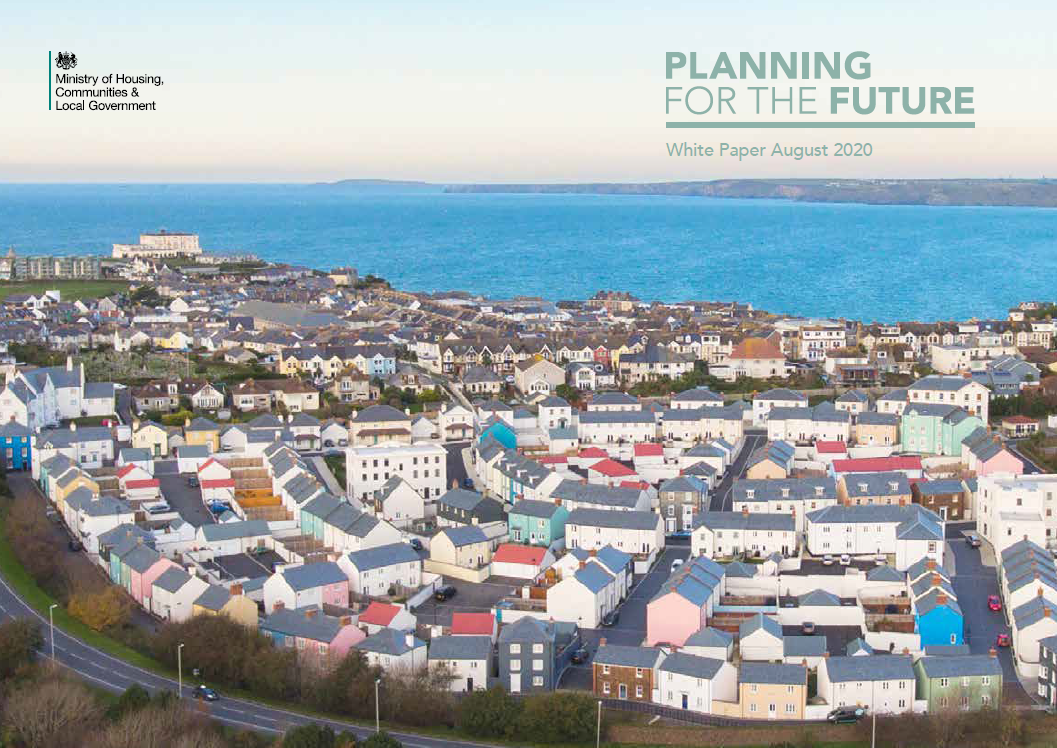