Colchester Tendring Borders Garden Community – This project was to deliver a garden community on the eastern side of Colchester between the A120 and the University of Essex campus/A133. The project includes: (i) the delivery of a new Link Road between the A120 and A133; (ii) the delivery of a dedicated bus RTS (Rapid Transport System) through the site; and (iii) delivery of the bus RTS from the A133 through Colchester town centre to the existing park and ride at junction 28. Without investment in this infrastructure only circa 1,000 units could be delivered. The delivery of the Link Road and RTS unlocks an additional 6,500 homes to allow a total capacity for c. 7,500 houses.  Essex County Council had applied for £100 million of HIF funding to deliver the above works out of a total cost of £110.81 million.

Colchester Braintree Borders Garden Community – This project was to deliver further improvements to the strategic highways network which are already proposed to the A12 around Kelvedon and Marks Tey on the Braintree Colchester boarder in Essex.  Highways England have a current £1 billion RIS 1 scheme for improvements to the A12 between Chelmsford Boreham Junction 19 and Marks Tey Junction 25.  This baseline scheme would allow highways capacity for c. 6,000 houses on land at Marks Tey. The additional improvements proposed as part of the HIF scheme would unlock capacity for an additional c. 15,000 homes which will result in a total development capacity of c. 21,000 units. Essex County Council had applied for c.£230 million of HIF funding to deliver additional improvements to the A12.

A320 North of Woking – This bid by Surrey County Council (SCC), supported by Runnymede Borough Council (RBC) was for c. £44 million to upgrade the A320 from Chertsey in the north (at its junction with the B388 Thorpe Road) down to Ottershaw in the south (at its junction with the A319 Chobham Road / B3121 Murray Road); including works to St Peter’s Way and junction improvements to the M25 Junction 11. The housing unlocked was to be delivered across of portfolio of 11 x sites across the area.  These sites are currently in the green belt and the Local Plan examination was suspended pending certainty that the highways infrastructure improvements could be delivered (which was dependent upon the HIF due diligence). 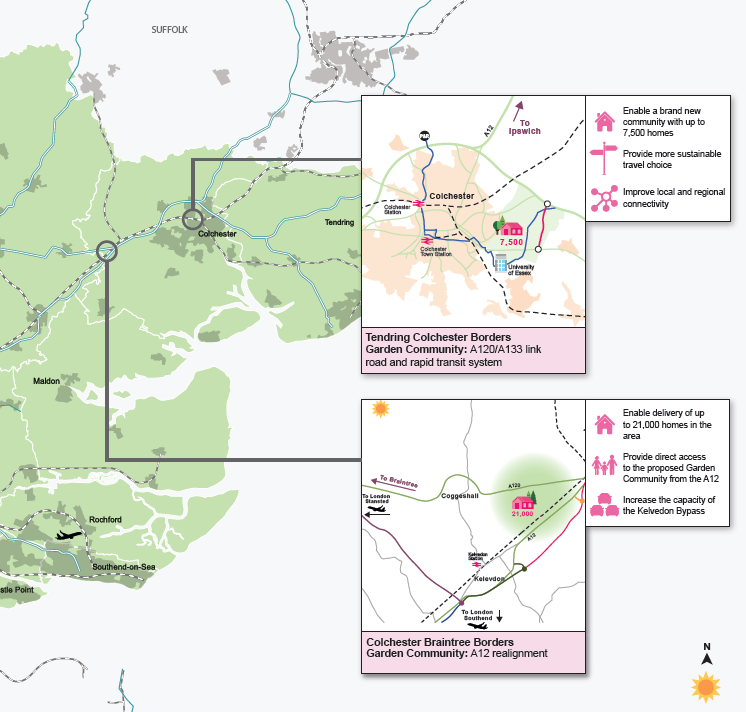